Should we be spending the surplus? 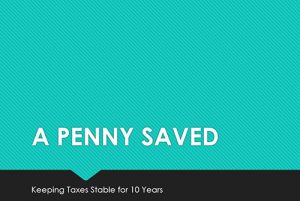 ANSWER: Does anyone think spending your savings is ever a good idea?

After working for 10 years to grow the surplus while stabilizing taxes. it would be a very big mistake to start spending the surplus for anything except its designed use.

First, in this year’s budget, we agreed to use over $3.5 million from the surplus to offset taxes. It is its intended use, it is the way it is always done… because it works.

Over the years, we have worked hard to replenish the surplus by watching all spending.  its second intended use it to manage cash flow. If one big taxpayer were to hit hard times and be late on their taxes, our surplus would have to cover the lack of revenue until we collected. If the surplus was reduced or eliminated, we would see the biggest tax rate hike in Delran history.

Finally, we collect the taxes for the school district, the county, the fire district, the county library, county open space tax and our open space tax. That is a total of over $50 million dollars that come in and out our bank account each year. If anyone of those other entities requests their money, we are obligated to write a check to them immediately. If we didn’t have the money in the surplus, we would be obligated to borrow that money to give to the other organization. That costs the township money.

Before our group was elected, the prior council had used $2.2 million of their $2.9 million surplus for tax relief. We knew that building up the surplus had to be a priority. In the next 10 years, they worked to increase our surplus by $5 million dollars while keeping the Local Purpose Tax stable.

Like everyone else in the world understands, if you can possibly set aside money to protect yourself during hard times, you save…and you save as much as you can. Has anyone ever heard the expression, “Don’t bother saving for a rainy day”? Neither have we.

Your email address will not be published. Fields marked * are mandatory.